JavaScript as the centerpiece of a complex web stack

Participants would understand how ReactJS works and how to build a single page app with ReactJS. We will also briefly touch upon the Flux application architecture and see how we can architect applications with the Flux architecture

ReactJS helps us build Reactive UIs with javascript. It was built by Facebook and is used by open source editors like Atom. ReactJS builds a Virtual DOM instead of using Browser’s DOM that allows Single Page Apps to run at 50fps even on mobile browsers. This also simplifies the View code as there is no need to track the state of the DOM and can simply re-render the view without affecting the performance.

The workshop will be structured into three parts. The first and third part will talk about the state of React and its path going forward and the meat of the workshop would be a hands on approach in building a Todo List app using a parse backend and the UI built with React.JS and Backbone.

I have been building apps for the past 10 years with various technologies like Clojure, Ruby, Node, Python and Java. Both libraries like jQuery and frameworks like BackboneJS, Ember, Angular have left me wanting with a better way to build large apps. Having worked with ClojureScript and Om, I beleive that ClojureScript with frameworks like Om/Reagent is probably the best way to organize large frontend codebase. 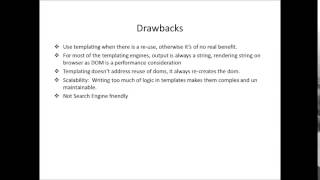 This session will cover from basics to mastery on templating both client and server side. more