A conference on React 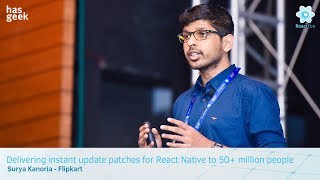 Section: Crisp Talk Technical level: Intermediate
This proposal has been added to the schedule

One of the chief reasons why we adopted React Native at Flipkart was to deliver Over The Air (OTA) updates to our 50+ million users instantly. When we looked at the known existing solutions like CodePush etc, we found three major issues that were not solved but were critical for us:

We built our own system which efficiently solved all of these issues and is being used by multiple Apps inside Flipkart.

This talk will give a detailed description of the solution and teach the audience to build their own optimized solution to deliver instant OTA updates for React Native.

The existing issues with other Over The Air Update solutions
Workings of the React Native Packager
Making the unpredictable bundle generation, predictable
Getting just the update patch
Sharing code between multiple bundles
Further optimizations
Building a generic deployer system.

Surya Kanoria is a co-creator of the team that started React Native at Flipkart. He developed the Over The Air Update System for React Native. He has also worked on the Android, PWA, AMP and Windows stack at Flipkart apart from React Native. His goal is to improve User Experiences on Mobile Devices and is currently working on developing a Cross Platform Framework.

I will be talking about how to achieve Shared Element Transition with React Native for both iOS and Android.