On health, nutrition and fitness

The Magical Vitamin D3 & It's Value to Human Health

The benefits of Vitamin D3 - beyond bone health. If there is one product that you must consume, it’s Vitamin D3, it could just turn around your life!

Upwards of 95% of the Indian population is deficient in Vitmain D3. Everyone thinks Vitamin D3 has benefits that are only related to bone health. I’d like to share some insight into the true benefits of Vitamin D3 - beyond bone health.

I founded Unived when I was 27, about 6 years ago. We are the first and only plant-based dietary supplement brand in India. Through our own R&D efforts, we have developed various formulations that address a broad spectrum of health touch points covering evertyhing from general health to sports nutrition. You may see our work at www.unived.in

Prevention and management of psychiatric disorders with Yoga and Naturopathic medicine

Psychiatric disorders are the major source of disability, which has a prevalence rate of 10.6% in the Indian population according to the National mental health survey report 2015-16. According to this report the prevalence rate of mood disorders, neurotic or stress related disorders, schizophrenia and other psychosis account for 2-3 times more in urban metros. Despite the best Pharmacological and psychological interventions are available in these disorders, prevalence rate has been increasing along with the disability, long duration of the treatment and adverse effects of the medication causing a major concern. Therefore, effective interventions in this population are the need of the hour. In this direction, the complementary and alternative system of medicine modalities such as Yoga and Naturopathic medicine have shown some promise in common psychiatric disorders like depression, anxiety, substance use disorders, schizophrenia and childhood developmental disorders like autism spectrum disorder, attention deficit hyperactivity disorder and mild mental retardation. Also, these interventions have been very crucial in preventing mental illness and also effective in managing co-morbid medical conditions associated with these disorders such as Obesity, dyslipidemia, diabetes mellitus, Hypertension and hypo/hyperthyroidism. Yoga and Naturopathic system of medicine utilize different treatment modalities such as modern and naturopathic Dietetics and nutrition, Nutraceuticals, Acupuncture, Massage therapy, Fasting therapy, Exercise therapy and Yoga therapy (Yoga postures, Pranayama, Relaxation techniques, Meditation, Yogic counseling). Mainly these treatments work on reducing pro-inflammatory cytokines, regulating autonomic functions, enhancing cognitive functions, regulating growth factors and neurotransmitters. 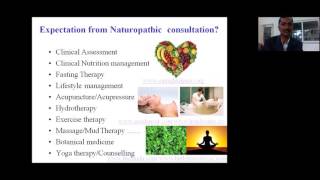