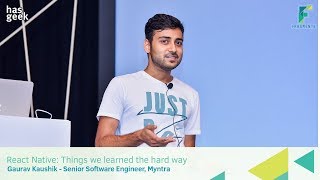 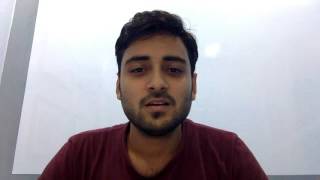 At Myntra, we jumped the React Native bandwagon relatively early. Now, having used in it production for almost 2 years, we’ve had a lot of success along with a great deal of learnings which we’d like to share with a larger audience

I’ve come across many teams that are really excited about React Native(RN) but have some apprehensions when it comes to using/integrating it in their production apps. Having realised the benefits of RN early on, we were one of the early adopters of the technology and have been using React Native in our apps that reach millions of users for quite sometime now. And we’d like to share our learnings with the community

Since React Native(RN) has been around for quite some time now, in this talk, I’ll only briefly go over what RN is, and how our journey with RN in production has been. The core part of the talk would focus on the following:

I am Gaurav, Senior Software Enginner at Myntra. Working on moving our android and iOS apps to React Native (one feature at a time)

The REPL provides quick feedback cycles that are necessary to keep developers in charge. Dynamic, and interactive environments that propel the development process are essential in all faces of software development, and the mobile ecosystem has recently seen an uptick here with React Native. Couple that with an inherently REPL driven language like Clojure(script), and we have a close-to-ideal envi… more