The sixth edition of droidconIN

All submissions
PreviousNext
VS

Developing android applications is easy up to a certain point after which complexities start to occur. It might be caused because of complex views, several background tasks or anything else, due to which developer get involved in resolving such complexities instead of focusing on the business logic of the application.

In this talk, I would discuss the importance of Architecture patterns in android and how MVP can be used to minimize various complexities mentioned above.

If you are an experinced developer, this talk would help you in writing improved codebase but if you are beginner in android development then this will you a new of way of thinking and writing code for android apps.

There will be two major components of this talk.

In the first part I will focus on importance of architecture patterns in android:

In the second portion of talk I will explain implementation of MVP in android apps:

We will also take a look on how code coverage can be increased with the efficient use of MVP pattern.

I am a 4th year undergraduate student in computer science at LNMIIT, Jaipur.
Currently I am a Google Summer of Code Intern with Mifos Initiative working on their Self-Service Android Application project. I am developing Self-Service Application from scratch following MVP architecture pattern, which makes me a perfect candidate to discuss about this subject.
I am an open source enthusiast with contributions to android projects of various open source organisations such as Mifos Initiative, FOSSASIA, openMRS and many more. All my contributions can be found on my GitHub profile.
Also, I have worked for various Indian startups as an android developer in the past. 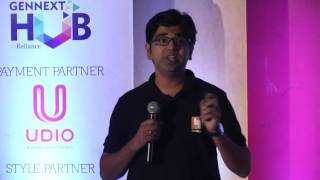 How can a developer make apps to instantaneously run on any real, global, mobile carrier network in a dead simple manner, without changing any code? How to analyze the network traffic and see targeted corrections along with boost estimates. This performance depends upon (but can be easily learnt as building blocks) multiple factors including signal strengths, tower handoffs, and spectrum differen… more