Rootconf proposals for round the year in 2018

On DevOps, security, cloud and IT infrastructure

This funnel is open round the year for meetups and smaller conferences in different cities. Submit right away!

Prometheus: Ready for the future!

The Prometheus monitoring system collects and stores time series data to give valuable insights over hosts, containers, and applications. Its storage engine was designed to be multiple orders of magnitude faster and more space efficient than, say, RRD or SQL storage. However, with the rise of orchestration systems such as Docker Swarm and Kubernetes, and their extensive use of techniques like rolling updates and auto-scaling, environments are becoming increasingly dynamic.

This increases the strain on metrics collection systems. To deal with the challenges, a new storage engine has been developed from scratch, bringing a sharp increase in performance and enabling new features. This talk will describe this new storage engine, its architecture, its data structures, and explain why and how it is well suited to gracefully handle high turnover rates of monitoring targets and provide consistent query performance.

Goutham is a student and a developer from India. His enthusiasm for Ops got him an internship on the infra team of a large company where he worked on Production infrastructure and built the company’s monitoring system on top of Prometheus.

That was his first encounter with production systems and Prometheus, and this summer, he started contributing to Prometheus and interned with CoreOS, working on Prometheus’ new storage engine. He is now a maintainer for Prometheus with a focus on TSDB, the storage engine powering it. 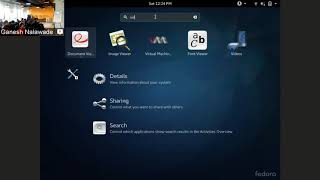 My Ups and Downs with Ansible

Ansible is software that automates software provisioning, configuration management, and application deployment. Ansible is a radically simple IT automation platform that makes your applications and systems easier to deploy. Avoid writing scripts or custom code to deploy and update your applications— automate in a language that approaches plain English, using SSH, with no agents to install on remo… more