Scaling platforms and services. Co-hosted by Rootconf, Red Hat and the Linux Foundation.

Fabric8 is an end-to-end development platform spanning ideation to production for the creation of cloud-native applications and microservices. You can build, test and deploy your applications via Continuous Delivery pipelines then run and manage them with Continuous Improvement. Fabric8 is powered by Red Hat OpenShift. Slides

Talk about various features of Fabric8.

Baiju Muthukadan is a Senior Software Engineer working at Red Hat, Bangalore. He has contributed to many Free/Open source software including Zope, Koha and Salt. He founded the Swathanthra Malayalam Computing project in 2001 while studying at REC, Calicut (NIT, Kozhikode). He was also employed by Free Software Foundation of India in 2002-2003. He received the first Kenneth Gonsalves award in recognition of his many contributions to Python language community in India. He is a co-organizer of Bangalore Golang meetup and he had conducted many Go workshops including one as part of Rootconf‘16. He has written a book about Go. 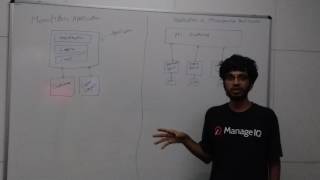 Microservices is an implementation architecture in Service Oriented Architecture where we are building fine grained services, which specialize in doing a single kind of task and doing it well. These services are loosely coupled and lightweight, and usually interact with each other over prevailing network protocols through the use of RESTful APIs, message buses, etc. The Microservices architecture… more