A conference on data, machine learning, and distributed and parallel computing

Harnessing the power of the Erlang VM at Housing 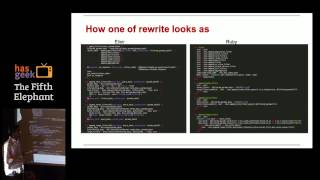 RoR and Django has ensured we remain productive in the face of rapidly changing product requirements at Housing. However we ran into issues of memory and speed when we had to scale throughput and interface with other services in our SOA. This talk describes how we rewrote some core parts of our infrastructure to ride on the coattails of the awesome Erlang VM.

I would briefly introduce the audience about the Erlang/Elixir, the actor model and its benefits.
We will discuss the following three use cases as examples of where we used the Erlang VM to overcome limitations of speed and memory in our core infrastructure

Finally I would also like to shed some light upon production issues that can occur in Erlang VM and the ways to fix them.

Abhijit Pratap Singh is a Software Developer at Housing.com. He has been working at Housing.com for the past two years. He has played an active part in developing the product backend for Housing.com.

Pranav Rao is a Software Developer at Housing.com. He was the primary developer behind the geo-services backend at Housing.com working on search and storage of other geo-entities.