The sixth edition of droidconIN

Going native with GStreamer on Android 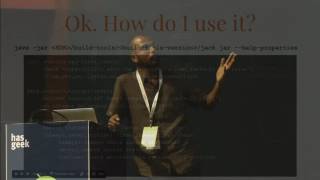 This talk will go over the new Jack and Jill toolchain & the new Java 8 features that they bring to Android land. You will learn about -

What are Jack and Jill (aka why should you care about this?)

Jack is Google’s new compiler/toolchain for Android. It compiles Java source into Android dex bytecode. It will replace the current javac, ProGuard, jarjar, and dx toolchain.

The talk will cover

How to enable Jack?

Reason why you want to upgrade - Java 8 features

Features compatible back to Gingerbread

(these use anonymous classes and hence are compatible back to Gingerbread)

Features supported in Nougat and beyond

I have been working on Android apps for the past 2 years. I am currently a freelance developer who works with Android and Python. You might know me from other events like PyCon 2014 where I presented a poster on Creating a Fall Detector using Raspberry Pi and Python or from my Android apps like, Search for Reddit.